Would the Army Oppose Siloviki Loyal to Putin? 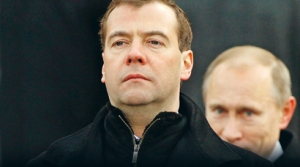 An unnamed FSB veteran thinks it would.

Monday New Times published a piece on the state of the tandem and political prospects over the next year leading up to the elections which will determine who will be Russia’s president until 2018.

The article’s authors ask whether Medvedev and Putin, frightened by North African events, might be determined to preserve the status quo by any means.  Or perhaps the president and prime minister face an inevitable clash.  The authors have consulted unnamed experts and present their findings.  Scenario No. 2 is Apocalypse Tomorrow.  The mood of the siloviki – in this case, rank-and-file men with uniforms, ranks, and guns – is key to Scenario No. 2 – the tandem blown up.  The authors ask “how would the siloviki conduct themselves if Medvedev decided to fire the premier and his entire government?  On whom would the experts bet?”

The authors asked former USSR intelligence and special service veterans of coup d’etats to sketch out what we’d see in the event of Apocalypse Tomorrow.  They sketch out some of the things Putin and the government would do in addition to calling for the support of the siloviki.

In the end, the article examines the possibility that Putin might agree to go, with the right personal and financial guarantees in place.  His situation is not, after all, exactly like Mubarak’s or Qaddafi’s.

“’Putin can hardly count on the silovik bloc if the matter gets to mass bloodshed,’ even a highly placed employee of the FSB’s Spetsnaz Center, which today joins in its structure Directorate A (formerly Group A) and Directorate V (formerly Group Vympel).  ‘His sole full-blooded reserve capable of entering the fray is the Internal Troops [VV], and mainly the VV Spetsnaz’ – the so-called maroon berets.  ‘They are the ones in 1993, after one of the Vympel groups refused to participate in suppressing the civilian population, who fulfilled the given mission’ (this means preventing the storming of the Ostankino television center – New Times).  ‘As far as the FSB Spetsnaz goes, after so many years of ‘reforming’ silovik sub-units, officers will scarcely be zealous in putting down civilians.  Quite the opposite.  It wasn’t for this that they risked their lives in the Caucasus.’  The weakest link, in the opinion of the same expert, is the army:  ‘Among the troops there’s a lot of negative information and dissatisfaction with the reforms that are being introduced.  Promises that a lieutenant will soon receive 50 thousand rubles just remain promises, the apartment issue isn’t resolved.  After the mass dismissal of officers – just in the past year 140 thousand completely young ‘reservists’ were put out in the streets – they will easily return to the ranks [i.e. Serdyukov’s reversal increasing the officer ranks by 70,000], but now they know who their enemy is.  Plus the disbanding of the GRU Spetsnaz.  As a result, the opposition will have something to oppose the Internal Troops.  So the generals will think a thousand times before giving the order to open fire, and if there is the slightest suspicion about the illegitimacy of the mission received, they’ll do everything to sabotage it.’”

“The experts polled by New Times come together on one thing:  a bloody scenario has a greater than 50% probability in one case:  if the premier and his closest silovik circle seriously fear for their lives and property and don’t get a security guarantee.  And now before their eyes there’s even a living example:  going peacefully into retirement Mubarak has a chance to preserve part of his billions frozen in Switzerland, Qaddafi shooting at his own people no longer has such a chance.”

Interesting scenarios, but there are a couple things your present author isn’t so sure about.  Firstly, two things not factored in that could be significant are:  the mood of the average militiaman [i.e. cop] who are very numerous and are also being ‘reformed,’ and the unhappiness among military retirees and older vets demonstrated recently in their Moscow assembly and last year on Poklonnaya gora.  One’s not sure, though, if they’re more supportive of Medvedev or Putin.  Given the choice, they’d probably shoot both.  Secondly, is Medvedev really the type to enter that kind of standoff (or any standoff actually) while holding very few, if any, good cards to play?  At the same time, one is cautious about assuming rational actors.  It’s perfectly conceivable the Russians could blunder and miscalculate their way into Apocalypse Tomorrow.

Meanwhile, Ancentr.ru was following a similar tack earlier this week . . . it looked at the recent personnel decisions regarding General-Lieutenant Valeriy Yevnevich which moved him from the GUBP to Deputy Chief of the General Staff and then to Assistant to the Defense Minister (ostensibly, to advise on peacekeeping activities).  The website thinks this interesting since Yevnevich is a ‘political’ general who as Taman division commander supported President Yeltsin in the 1993 battle with his opponents.  And, it says, such a decisive and staunch supporter of ‘democracy’ as Yevnevich could be useful to vlasti in a responsible post given the general growth in political tension in society, including also a “rise in disloyalty in the army.”  For example, he could command special VDV or other sub-units in an emergency to ensure their loyalty to the regime.  Ancentr.ru goes on to detail other reports from NVO’s Vladimir Mukhin about the level of discontent in the army’s ranks as well as ex-General Staff Chief and Security Council staff member Yuriy Baluyevskiy’s possible role as leader of a military backlash against Defense Minister Serdyukov’s reforms.