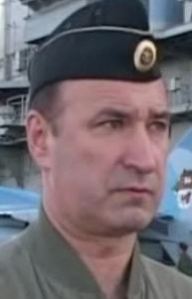 We’re gradually reaching the end of the slow news season . . . here’s a picture and a couple videos.

Colonel Deriglazov commands the Su-33 squadron aboard Fleet Admiral of the Soviet Union Kuznetsov.  He speaks about flying off the Russian carrier in the video below.

Hat tip to Militaryparitet.com for highlighting this Vesti.ru report on Kuznetsov pilots in action.  The video shows an officer (an LSO-type) at the “visual landing post.”  Some Russian carrier pilots have 160 landings to their credit, according to Vesti.

The Defense Ministry’s TV Zvezda had this video as well.

The Kuznetsov group remained in port (or at least at anchorage near) Tartus, Syria today, as RIA Novosti reported.