On January 22, President Putin appointed General-Lieutenant Aleksandr Matovnikov to be Deputy CINC of the Ground Troops. He had been Polpred in the North Caucasus Federal District since mid-2018 and Commander of Special Operations Forces (SSO) from 2015 to 2018. 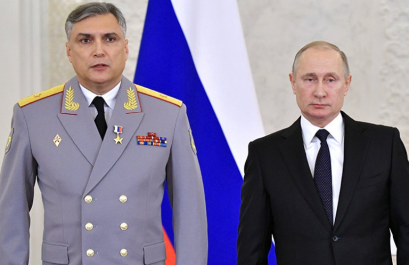 54-year-old Matovnikov was born in Moscow, the son of a career KGB officer from the 7th Directorate (Surveillance). His father was retired after destroying incriminating KGB documents when the ill-fated August 1991 putsch against Gorbachev collapsed.

In 1986, the younger Matovnikov graduated from the KGB Border Guards Higher Military-Political School in suburban Moscow. At his father’s request, he received a highly desirable posting to the 7th Directorate’s Alfa anti-terrorist group. He served in a motorized Alfa unit operating with Soviet Border Guards reportedly to interdict weapons and drugs smuggled from Afghanistan into Turkmenistan and Tajikistan.

Matovnikov served on Gorbachev’s security detail in Washington in 1987 and 1988. He went on to become first deputy chief of the FSB’s Directorate A (Alfa).

He fought in both Chechen wars, including involvement in hostage rescues in Budennovsk in 1995, Dubrovka in 2002, and Beslan in 2004. In Chechnya, he got the nickname “Chekist” (“state security man”).

Matovnikov was in charge of Chechen President Akhmad Kadyrov’s security. Kadyrov was assassinated in a 2004 bombing. Matovnikov reportedly got on good terms with Kadyrov’s son Ramzan, the republic’s strongman and possible hitman against those who impugn Mr. Putin.

In 2013, Matovnikov transferred from the FSB to the Ministry of Defense as Deputy Commander, SSO, then Commander in 2015.

Like many Alfa men, Matovnikov then went into a new structure attached to the General Staff — the Special Operations Forces (SSO), which unlike conventional armed forces sub-units could act in covert military operations abroad without the approval of the Council of the Federation. At first Matovnikov became Deputy Commander of the SSO, then headed them after the departure of Aleksey Dyumin in December 2015 for the post of Deputy Defense Minister. Matovnikov built the SSO structure in the image and likeness of Alfa — the equipping and requirements on personnel were the same as for officers in the former service . . . .

Matovnikov, Dyumin, and the SSO were instrumental in Russia’s 2014 seizure of Crimea and likely also in the invasion of eastern Ukraine.

Matovnikov received his Hero of the Russian Federation from Putin in 2017 for his time in Syria. He became a two-star general on February 22, 2018.

In mid-2018, RF President Putin selected Matovnikov to be his Plenipotentiary Representative in the North Caucasus Federal District.

. . . in the past he participated in specops in Syria, Africa and Ukrainie, but also parallel to his service in the SSO he was attached to the president [Putin] for special assignments, noted a former colleague of Matovnikov. “In [Matovnikov’s] circle, they talk about him as one of the siloviki close to the President — he regularly met Vladimir Putin at Vnukovo Airport and enjoyed his personal trust. It’s possible they decided to try the combat officer in civilian service [as Polpred], in economic work with the aim of a federal political career as they did with Dyumin in his time,” one Alfa veteran told RBK (Aleksey Dyumin at the beginning of 2016 was appointed Governor of Tula oblast). A source close to the Polpred in the SKFO [North Caucasus Federal District] confirmed for RBK that Matovnikov was an officer attached to the president for special assignments.

After just 18 months as Polpred, Putin sent him back to the MOD as Deputy CINC of Ground Troops, replacing 63-year-old General-Colonel Aleksandr Lentsov, who became Adviser to the RF Defense Minister — a familiar sinecure one step closer to retirement.

Matovnikov is married with two young children as well as an adult daughter from his previous marriage.

What do we make of the Mr. Matovnikov?

He’s an older, paler reproduction of Dyumin with differences. He’s seven years older and, though cut from the same KGB cloth, he’s Alfa not FSB-FSO-SBP — or Presidential Security Service — like Dyumin, who was Putin’s personal bodyguard and assistant. Many were quick to claim Putin was grooming Dyumin as his successor.

In fact, Putin is probably having auditions for men like Matovnikov and Dyumin to see if they are fit for bigger things. They are loyal KGB types who share Putin’s mentality. This may say more about Putin.

As Brian Taylor has concluded in his insightful The Code of Putinism, since 2015-2016, Putin has been shifting away from old, long-time colleagues who supported Team Putin for many years toward younger, less independent security service veterans who answer to him only. He may be seeking men willing to protect his freedom and fortune and keep him as president-for-life effectively. They could prevent Putin from becoming a future Ceausescu or Qaddafi.

Dyumin was Deputy Minister of Defense for just weeks before moving to Tula where he’s been governor for about 3-1/2 years. Matovnikov’s stint as Polpred was brief for a region as complex as the North Caucasus. Perhaps his stay with the Ground Troops will be brief too before he moves to another fully political post.

The insertion of a former KGB man and SSO veteran into the Ground Troops makes one think Putin wants dramatic and decisive victories, not just plodding, predictable daily management of preparations for wars Russia isn’t likely to fight. As such, Matovnikov is probably pretty unwelcome where senior Russian Army officers have toiled their entire careers.

In Voyenno-promyshlennyy kuryer on 10 February, Aleksey Mikhaylov gives us details on the career of new GRU Chief General-Lieutenant Igor Korobov, and perspective on issues he needs to resolve for GRU Spetsnaz forces.

Mikhaylov writes that Korobov’s appointment continues a tradition from the end of the 1990s:  the first deputy chief for strategic [agent] intelligence becomes the new head of the GRU.  His immediate predecessors — the late Igor Sergun and Aleksandr Shlyakhturov — were both “strat guys.”

As for Korobov, he matriculated at the Stavropol Higher Air Defense Aviation School in 1973 (making him about 61).  Graduating with distinction in 1977, the new lieutenant headed north to serve at Talagi airfield near Arkhangelsk in the 518th Interceptor Regiment — part of the 10th Independent Air Defense Army.

Korobov’s regiment flew large, long-range Tu-128 / Fiddler interceptors with the mission of engaging U.S. B-52 bombers in the Arctic.

In 1981, according to Mikhaylov, Korobov was accepted into the Military-Diplomatic Academy — the GRU’s training ground.

It’s worth noting that bmpd.livejournal.com ran a lengthy item on 7 February with several photos from Korobov’s days in Stavropol and Talagi.  It adds that he served in the 2nd squadron of his regiment.

In 1980, a “buyer” arrived from Moscow to talk to the regimental commander and review files of young officers.  He picked two candidates — Viktor Anokhin and Korobov.  Anokhin demurred because he wanted to fly, but Korobov accepted.  The former went on to become a two-star in the Air Forces.  The latter began his career in the GRU.

All this explains how Korobov came to have blue piping on his dress jacket and epaulettes.

But back to Mikhaylov . . . .  The GRU, he writes, is associated primarily with “illegals” and “foreign residencies” which acquire information on the latest developments in the military-industrial complex of the “probable enemy,” the deployment and armament of his forces, and “nuclear secrets.”  It also has directorates specializing in electronic and space reconnaissance, cryptanalysis, etc.

“At the same time, the GRU also answers for the deployment and TO&E structure of army reconnaissance sub-units subordinate to the reconnaissance directorate of the Ground Troops.”

“After special designation [Spetsnaz] brigades that transferred to the Main Command of the Ground Troops during the transition to the new profile [under former Defense Minister Serdyukov] returned to the GRU, the Command of Special Operations Forces [SSO] also went into the structure of the directorate [GRU], according to some reports.  So besides strategic, electronic, and space intelligence, the head of the GRU and his subordinates have to work with Spetsnaz units and sub-units, and SSO Centers, and participate in the reorganization of the reconnaissance elements of the Ground Troops, Navy, and VDV.”

Mikhaylov asked Spetsnaz officers about the problems of their branch, and ways to solve them.  The majority, he writes, think the Spetsnaz still suffer from reforms instituted by Serdyukov.  Its commanders know how to lead, but not necessarily how to conduct reconnaissance operations.

Experienced Spetsnaz commanders lost in Serdyukov’s time have been replaced by officers who don’t understand reconnaissance, according to Mikhaylov’s interlocutors.  They call for better cooperation between the GRU and Main Command.

Several of his sources say Spetsnaz units and sub-units have become too numerous, at the expense of electronic reconnaissance.

Mikhaylov adds that Spetsnaz operations in the enemy’s rear areas require aviation assets, helicopters in particular.  But it’s unclear who will provide this air support. Other officers, however, contend that modern specialized armored vehicles like the Tigr are sufficient for most operations in which Russian forces are likely to find themselves.  But reconnaissance battalions and brigades need more UAVs, and greater numbers of advanced electronic reconnaissance systems, another Ground Troops officer told Mikhaylov.

Combined arms reconnaissance has one more headache — recently formed sniper companies for which the brigade’s chief of reconnaissance is responsible.  One sniper officer told Mikhaylov that these companies already exist though without guidance, regulations, or combat training plans.

In conclusion, Mikhaylov concedes that new GRU Chief Korobov won’t have to deal with these problems personally, but his subordinates will.

This all becomes even more interesting if you consider that the GRU, SSO, and army reconnaissance Mikhaylov describes have probably deployed on battlefields in Ukraine and Syria without sorting out their unresolved organizational and operational issues first.